The prospect of job automation is more than a bit scary. Everyone likes a bit of help, provided that bit doesn’t help them out of a job. NPR ran a feature (“Will Your Job Be Done by a Machine?,” May 21) 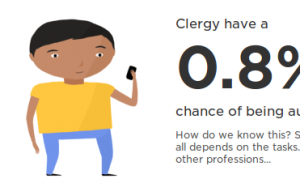 While some professions will almost certainly be automated to some degree, there’s only a 0.8% chance that the clergy will be automated.

This made me think of a particularly odd episode in Universalist history where it wasn’t the clergy that was to be automated, but the works of divinity.

To be fair, John Murray Spear had left the Universalist ministry in 1852 for Spiritualism, which was intensely popular (and controversial) among Universalists.

In Lynn, Massachusetts, he gathered a group of followers to “[create] the ‘New Motive Power’, a mechanical Messiah which was intended to herald a new era of Utopia.” [citation] Like made of machinery.

It didn’t work. But it is an intensely weird and wonderful episode that deserves a read. (One version of the story.) But in re-reading the story today I discovered that Spear channelled Universalist founder (and namesake) John Murray, and published his revelations in Messages from the superior state: communicated by John Murray.

“Important instruction to the inhabitants of the earth”? That’s something I’ll have to read!

View all of Scott Wells's posts.

This site uses Akismet to reduce spam. Learn how your comment data is processed.

The Boy in the Bands is a record of the passing thoughts of Scott Wells, now more cultural and less churchly. That side of my writing is now at revscottwells.com, thought I'll keep an archive here, too. I'm proud of my employer and colleagues, but the opinions here are mine.